Javascript has been a popular programming language for a while now. Only recently has it received quite stiff competition from React by Facebook. With the advent of functional programming improvements in Javascript, there seems to be more support for Javascript. Even if we look at the Trends for the past year we can see that Javascript is still a more popular term as compared to react. Functional Programming (FP) is the process of building software based on fundamental principles by composing pure functions. It is relatively easier than object-oriented coding as per most programmers. In 2018, Functional Programming especially benefits from the recent Javascript improvements such as ES6 and ES7.

While VueJS is technically not a new player, it has been gaining prominence only in 2018. Created in 2014 by Evan You, Vue is a fast and lightweight script. Angular JS is backed by Google while React JS is backed by Facebook. Vue though is an independent open source project. Its creator was working on this as a side project and has recently been focusing on marketing and maintaining the open source project. What makes Vue a growing trend in 2018 is that it is now being used by a lot of major companies in China such as AliBaba, Expedia, Nintendo and more. It has also grown tremendously since it first began as it now boasts 20 people on its team.

Ever since bitcoin blew up to unprecedented prices everyone seems to have become an expert in blockchain technology. It might be a little bit too late to say that blockchain is going to be a trend in 2018 as it has already accumulated a large following. A large number of companies are looking forward to incorporating blockchain technology in their industry. The blockchain is a method of collective data storage. Transactions in blockchains work without intermediaries. Since the transactions are verified using complex algorithms using a large number of computers it is seemed to be relatively safer.

Imagine a global network of appliances connected to each other using resources in the most efficient manner possible. That is what internet of things is trying to achieve. Although there are smaller home appliances using IoT, large multinationals are thinking of ways to utilize the development trend to improve efficiency.

CodePlateau is one of the best web development agencies in India. We are constantly on the lookout for the best web development trends that could become huge in the future as we like to stay on top of things. We believe in providing our customers with websites and web application development solutions in India that stay relevant for long periods of time. If you are interested in any of our services, let us know. Drop a message and we’ll get back to you soon. 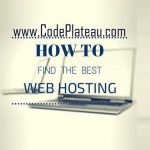