App Advertising Secrets No One Told You About

Since app advertising was such a large business many spurious app developers had published apps on the play store. Google fairly recently announced that it took action against “bad” apps in the play store and deleted more than 7,00,000 apps as well as removed over 1,00,000 developer accounts from the play store. This was with regard to the apps that violated their terms and conditions. Being the best app development agency in Pune, we never had any fear of such a thing affecting us. However, due to the action from Google, it now seems like businesses are hesitant to build apps for their businesses.

This is surely a big mistake on the business end. We have written extensively about why a mobile application is absolutely necessary for a business. In that blog, we talked briefly about the advertising potential of mobile applications and how it can have a monetary advantage to your business.

Let’s have a look at the app advertising secrets in more detail:

This is a pretty popular model. Part of your app is available to the users for free at all times. However, there are some features that are available to the users only after they buy the application from the play store. This is a great business model for any business that has an essential feature that no other app can adequately replicate. Larger organizations have been using this approach to sell their software as well

Another method of gaining income from apps these days is to make in-app purchases possible. Users can pay for upgrades for the app content within the app itself. This is a popular method especially for games to make money from. Normally users of an app will purchase in-game bonus features to get an advantage in the game over their opponents.

This is classic advertising strategy. While you provide the app for free, you provide advertisers with a platform to advertise on your app. The ads will either be in the form of a banner or an no skip video.

There are certain apps that themselves are a source of income for the business. Paid apps are sold to users with the promise that they serve a function that is not adequately resolved by any other program in the app store or play store. People would be willing to pay for the apps in order to seemingly make their lives slightly less cumbersome.

This business model utilizes advertising in the app to reward the user for engaging with the app. This is also a popular method of receiving revenue from the app.

Irrespective it becomes extremely important for a business to have an app to constantly remind the users about the organization and provide additional marketing emphasis and branding opportunities for companies.

Why Pick CodePlateau As Your App Development Agency?

CodePlateau is one of the leading iOS and Android App Development Company in Pune. We have worked with several large organizations to build native apps for various in-house processes. We always ensure to work within the framework and guidelines set by Apple and Google to ensure that any app we build fully adheres to the rules set by them. If you would like to know more about our mobile app development process, costing structure please do get in touch. We provide you with a free consultation and we can take the conversation forward from there. 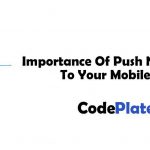